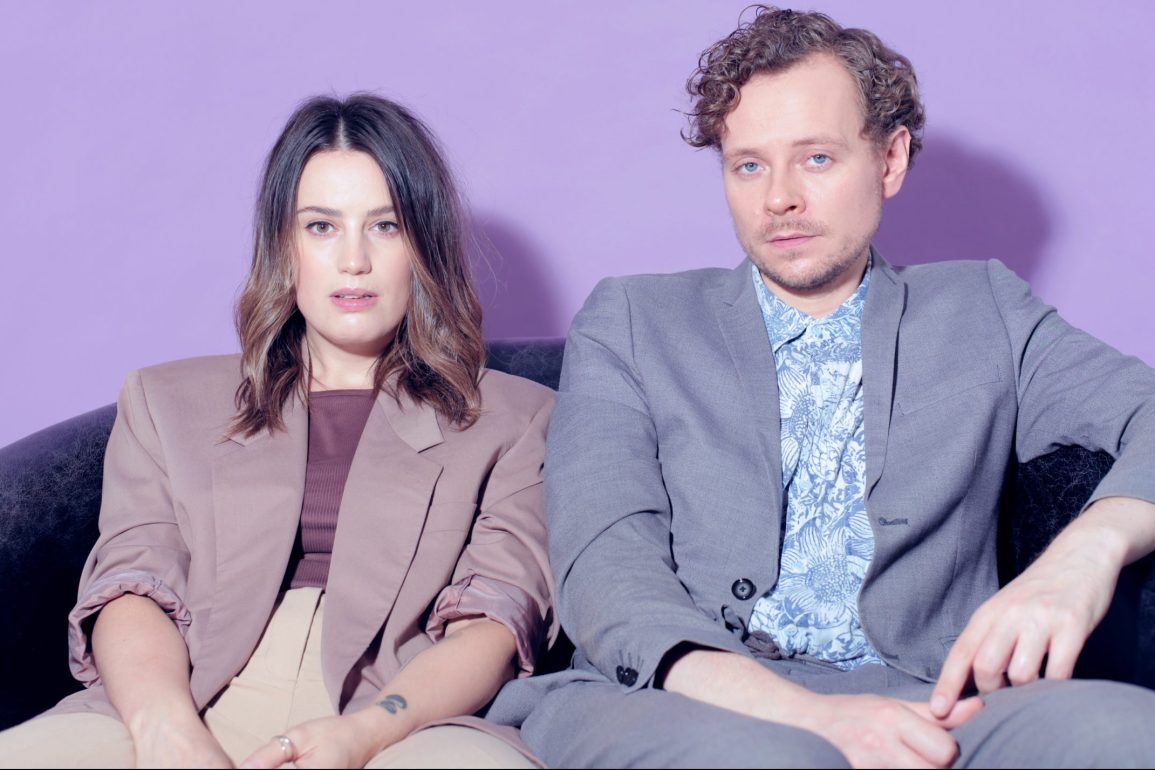 Released via Sinnbus, The Day’s latest track ‘JUNE’ is a touching and nostalgic song about old friendships that have faded as a result of the natural process and phase of growing up. Although your relationship wasn’t meant to continue, one can still look back on fond and more innocent memories in your transition to adulthood. Your heart may be fluttering with joy or you may be cringing slightly as you think back to those simpler times. Nonetheless listening to this ethereal indie gem, one can truly reflect on how far they have come. Consisting of members Laura Loeters and Gregor Sonnenberg, the two usually collaborate online. We chat with the remarkable band The Day below.

Guitar music with lush dreamy female vocals (still pretty determined at times), surrounded by vintage synths and pushed forward by electric bass and drums. Maybe think of Daughter kissing Slowdive goodnight somewhere on an empty field, that could be us. 😉

Most recently ‘songs’ by Adrianne Lenker, ‘Bitterzoet’ by Eefje de Visser, in recent years ‘Any Other City’ by Life Without Buildings. It helped us realize how even in a non-instrumental band, guitar and bass can take over the melodic part of a song.

Fender Jaguar guitar, because it is present in a way that is hard to achieve with other guitars. EHX Holy Grail, it broke down once, even though we use so many more reverb pedals (Earthquaker Devices – Dispatch Master, Walrus Audio – Slo, Strymon – Flint) we had to get it fixed because the others did not feel the same. Vintage Roland RE 301’s Space Echo in the studio – even if you just plug the guitar into the preamp of that unit alone without using anything else, it adds an instant vibe to the sound and it’s everywhere on our records.

Hard to say. Laura, being a Dutch girl, is absolutely in love with small Dutch licorice sweets – but we are not sure how far the addiction goes. If we would still sound the same without those, phew, hard to tell. 😉

Oh impossible to decide here. We surely love to work on the music behind closed doors and it can be very fulfilling. But we live in two different cities in two different countries – a lot of our studio work is done with the other one not being present and sending files online. During the pandemic it was especially hard to not see each other as often as we usually do when playing live for audiences. And the interaction with the audience we surely really did miss during the pandemic, absolutely! So we can’t wait to play all of the new stuff live that we are working on at the moment for the new album.

When we opened for Kae Tempest at their show at Melkweg in Amsterdam. They were super sweet and for some reason it was our backstage who had the fridge and they did not have one. So we kept the food for their cute little dog they had with them in our room. The show for us also went pretty well and we got real good feedback from their crowd. And the band really killed it that night, too. It was at the time of ‘Let Them Eat Chaos’ and we were really blown away by seeing them perform these powerful songs live. Wow.

We once had a bizarre gig right on a camping trip in the Netherlands. When we played our show they painted animal make-up on children’s faces right next to the stage and we could not really focus on our show as we did not really feel we belonged there. Haha. Funny memory.

Check out ‘Same Light’ by young singer Philine Sonny, we discovered her recently. Wow! And also our friends August August and Debby Smith are worth checking out! Say hi from us.

Probably Sigur Rós. Because for the whole time our band has existed, they were there from the beginning putting out great records and inspiring us sometimes quite closely and sometimes more on a deeper level. And their music seems so otherworldly in a way that we feel it would be really fascinating to work with them but also getting to know them “as normal people” would be quite interesting we imagine. Would it take any magic away? We don’t know.

Gregor: Carpenter (but my technical skill is close to zero unfortunately).

We are still booking new shows at the moment, as everything is slowly opening up here in Germany and Belgium where we mostly play and we are not allowed to tell you yet. Check our website or social media for new dates. We just released our new single ‘JUNE’, a song which is very dear to us and is a real coming-of-age song. The song is about a deep friendship that somehow got lost on the way to adulthood. It will be part of our new album which will be released at the end of this year. But there will be more singles in the next weeks and months! Yay.