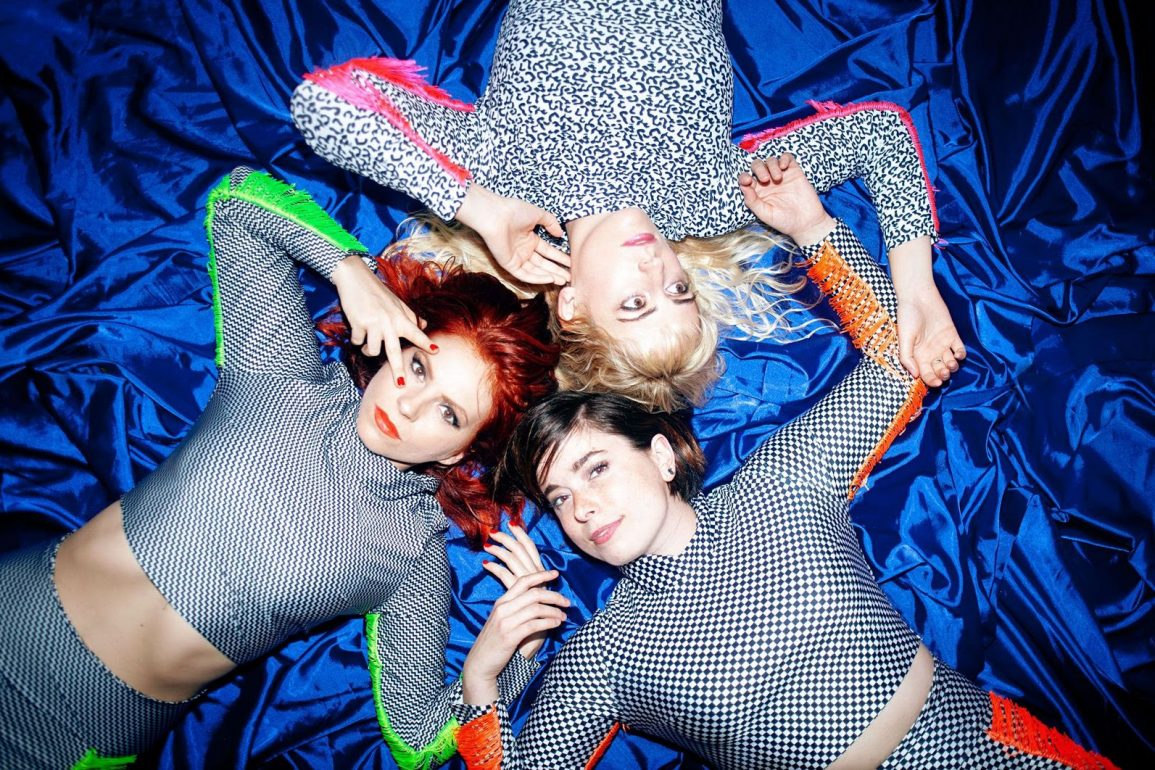 Consisting of band members Brit Boras (guitar/lead vocals), Rosie Slater (drums/vocals), and Marina Ross (bass/vocals) band New Myths prove to be a dynamite act of rock fusion. Their latest EP All The Shiny Things released on the 12th of November pays homage to all the fierce ‘90s band frontwomen that dominated our headphones back then. Featured track ‘Time Bomb’ premiered on Indie Music, and is packed with punch and energy that will get you through a busy day with ease and determination. The band has a few surprises in the works for the EP release, and they discuss further details about it in this exclusive Q&A with us.

Marina Ross (bass player) – I really love tapping on my Lomenzo Hyper Drive. It gives such a great crunch without losing any of the low end. I can also adjust it to my mood. Some shows I’m feeling more of a mechanical crispy sound, and some I’m feeling a rounder, fatter feel, and this pedal really can give me both and everything in between. We were able to get some amazing bass tones recording our most recent EP, and this pedal does an amazing job translating those tones live. And obviously the only bass I’ll probably ever play is built by our producer Seth Glassman.

Brit Boras (guitar player) – I love Boss VE-20 vocal pedal for live shows.  It allows me to have total control over what my voice effects are and sounds consistent every time.  I also have a 1980’s phaser pedal that has won my heart, every time I kick it on, it adds this whole new world to our sound, and I love it so much I have to make sure I don’t overuse it sometimes when I get excited at shows.

Honestly, a good sense of humor. We’ve added so many elements to different songs just cause it made us laugh. And then we’re like, oh shit, that actually sounds fucking rad.

We can’t choose between the two! They’re two completely different experiences that are both so fulfilling and fun. So both. Sticking with both.

We’ve been lucky enough to play some amazing shows with some amazing people, but I think one of our favorites was one at a venue called Alphaville where we decided to purely just have fun with it all. I think before that show we tended to focus on playing a “good show,” and that show we just said fuck it, let’s go out there and just have a good fucking time. Since then, I think our shows have improved drastically.

Similarly, one where we said fuck it, let’s get out there and just play (this one was much earlier on in us playing together). However, this one may have been after a fair share of shots and cocktails and didn’t really translate in the same way as the Alphaville show. Was a learning experience, you know?

Everyone should be looking out for Dream Wife. We played with them a few years ago and they just put on a wicked show and are just the sweetest people. Our buddies Jelly Kelly are also people you need to be looking out for. They are so fun and are doing some absolutely amazing things. We are also hosting a double EP release show with New Myths, Jelly Kelly, Desert Sharks, and Pamphlets on November 18th at TV Eye in Brooklyn, NY!

Garbage, we opened for them when singing backup vocals for Kristin Kontrol at Central Park Summerstage a few years ago, but would love to open for them as New Myth. We love their sound/vibe and they have inspired us as a band a lot.