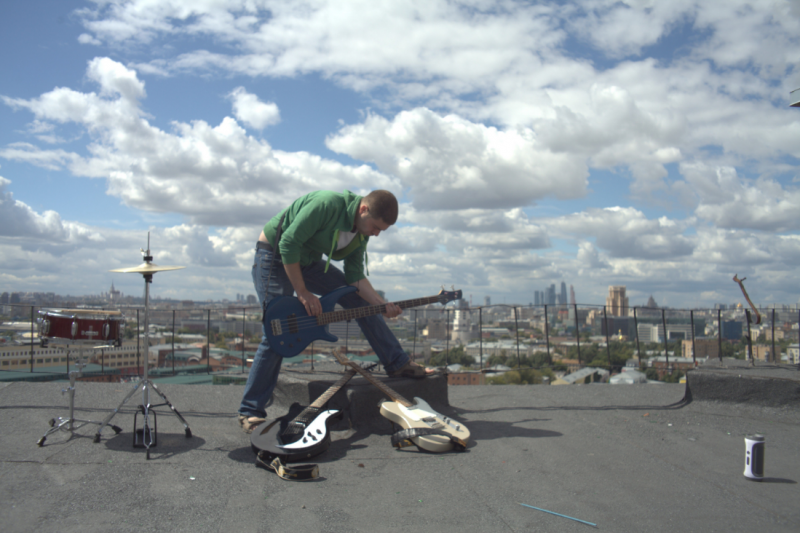 Every now and then you’ll hear a track that makes you sit up and pay attention. Apache Rose’s newly released ‘Blind Spot’ was one for us, putting the Russian band on our radar. We learnt that Apache Rose’s music is written and co-produced by Ilya Novokhatskiy but also featuring a rotating cast of supporting musicians. A large amount of the contributing artist are from the new underground rock scene in the country, bringing a unique flavour to their work.

To those not familiar with you, how would you describe your sound?
While we have a lot of influences, I don’t think we sound particularly like somebody, I guess it could be called something like “the new 90-s”

Which three albums have influenced you the most creatively?
Oh, that’s a tough one. Soundgarden’s “Superunknown” is the golden standard. Every song is great and you want to start listening again as soon as the last one ends. If we make an album like that I would be very proud. The Arctic Monkey’s first album was a real eye-opener for me. I mostly stick to the stuff I’m used to and I don’t search for new music a whole lot. But I heard the first song from that album at the party and got hooked immediately. That album is just fantastic in how they just throw themselves at you. I really love how they don’t get greedy with melodies and riffs and stuff the songs with different parts. That’s the same thing I love about “(What’s the story) Morning glory?” – it’s so generous melodically

Tell us about the key pieces of equipment that you use to define your sound?
My 50th anniversary Telecaster. I honestly don’t know what Korney – our guitarist – uses. But he claims he aims for Led Zeppelin 1975 sound. He’s one of the best in Russia, so I take his word)

Is there any “non-musical” ingredient that is essential to crafting your sound?
My voice 🙂 It’s an uphill battle for me but Russians are tough 🙂

Studio work and music creation, or performing and interacting with a live audience, which do you prefer?
Music creation and studio work. Cause we started with the songs and the studio and just when we began rehearsing for shows the lockdown started.

What has been your most memorable performance so far?
Since Apache Rose hasn’t had proper gigs yet due to the lockdown, I would say my first show in the early 2000-s in a Moscow bar called Shwein (pig in German). Some drunk guy we didn’t know started dancing and got the crowd going. I’m very thankful to him to this day

And which performance would you prefer to forget?
It was rather shambolic, my guitar rig kept turning off, we didn’t get paid, so that was a disappointment

Any new or emerging artists on your radar?
Yes. I must admit I closely follow The Mysterines. I was blown away by their Take Control EP. And the song itself makes me happy every time I listen to it. They’re great – that girl is on the road to world domination. Through them, I discovered The Amazons, Fontaines D.C. and several other bands.

If you could collaborate with, or perform alongside any artist, who would it be? And why?
Although I love several bands more than them, I would have to say the Sex Pistols because that would be pure joy without any pressure, I’m sure.

If you weren’t a musician what would you be?
An owner of a small business. Which I am, actually, apart from being a musician 🙂

Trent Reznor once said “To me, rock music was never meant to be safe. I think there needs to be an element of intrigue, mystery, subversiveness. Your parents should hate it.” What are your thoughts on this statement?
Almost 20% of the people following us on Facebook are old enough to be our parents. So I guess we’re not too intriguing&mysterious 🙂

Tell us about any upcoming shows or releases you have in the pipeline.
We’ll start gigging in Moscow as soon as lockdown ends. We’ve had several conversations which could lead to offers to play in Continental Europe and UK. We would love that. We have a lot of songs recorded, so we’re releasing them as singles and we’ll probably roll out an EP this summer.