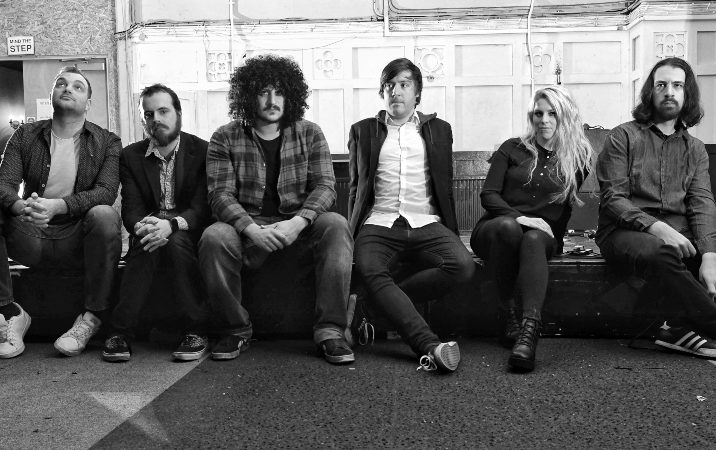 Based in Sheffield, UK band New Ghost have released their anticipated new EP FUTURE IS DEAD. The band is led by Chris Anderson (ex-FIRESUITE), and features renowned alternative UK musicians, including Caroline Cawley of DYSTOPIAN FUTURE MOVIES, Gareth Hughes of FLATLANDS & ex-65DAYSOFSTATIC, and Taz Ali of AWOOGA. Formed in 2018, the band has performed alongside acclaimed acts including Codes In The Clouds, Waking Aida, and Spielbergs.

We find out what makes this team tick in this exclusive.

Crunchy, sad sounds that lean into the euphoric when the moment calls for it. We try to combine different genres in a way that is sympathetic. Each of us comes from a slightly different musical background, predominantly from the heavier spectrum, but with New Ghost, that heaviness is deployed a little more sparingly. Emo-math-gaze? Glitch peppered art-rock? Prog-pop?  Delete as applicable.

Ever? Or recently? This can change weekly. When I started writing songs, Bjork’s ‘Vespertine’, My Bloody Valentine’s ‘Isn’t Anything’ and Sigur Ros’ ( )’ were perhaps the biggest influences I had. You could probably trace back everything I’ve ever written to those three records generally, but there are so many others! Albums have a unique way of imprinting on you at certain times in your life, and records like White Pony by Deftones, OK Computer by Radiohead, Mellon Collie And The Infinite Sadness by the Pumpkins, Frames by Oceansize, Grace by Jeff Buckley. A Story In White by Aereogramme and Strange Mercy by St Vincent all left an indelible mark at one time or another.

I’m really not a gear head, so I’ll just end up embarrassing myself if I try and talk about that too much. I do love pedals though, and a lot of the (guitar) sounds that are made on our recordings are made using a few in particular, chiefly the Turnip Greens pedal and the Memory Man. They are slathered liberally over a lot of our songs (as well as the Proco Rat).
My pedalboard and general set up is quite chaotic though so…there’s a part of me that likes to believe this is what gives our stuff that special ingredient (insofar as we have one). I like to think all these frequencies are just about managing to squeeze through their various pathways, and the sound that comes out is this (arguably not so) carefully curated chaos. I’m wrong, obviously, but denial is a powerful thing.

It’s worth noting literally everyone else in the band has a carefully crafted set up, all of them with impeccable technique, and their wires/pedals/drums are always tidy and clean. I’m the black sheep of the group there. I can’t give away all of their secrets though.

There’s a lot of love and respect in the band. Most of us have known each other a long time, and I have coveted them all from afar for a while, so when this project was coming together, actually getting to work with them on something was really a dream come true. I’d been a huge fan of Gareth in every band he’d been in, his playing always defined whatever record he played on pretty much. Same with Taz. I’d shared stages with Taz with my old band, and was always in awe of his playing. Same with Caroline. She has an innate ability to imbue anything she works on with its own heavy gravity. Being in the studio is a big love in really.

They both have their draws. New Ghost started out as a studio project, and there was never any larger plan that just making a bunch of recordings we really loved. For me personally, each separate thing is very unique, and its own catharsis, but one doesn’t really work without the other.

To achieve the kind of reaction and catharsis in a live setting that I would want, you have to have the material to begin with. This does really lead to adventures down the rabbit hole, and whilst the New Ghost material was a little “easier” to piece together relative to some other projects I have worked on, it still took a LOT of work and exploration.

Each thing has unmatched highs. Managing to wrangle all of these disparate elements into a sound collage that can move someone emotionally is an incredible feeling when you get there, or even close. In a live setting, managing to execute that same collage of sound in a visceral way to communicate its original intent, whilst also trying to elevate it is equally thrilling.

We’ve only performed in front of an audience twice, so both were memorable. I think the most memorable moment was when we were playing “Stampy” (from our mini-LP,New Ghost Orchestra). We had practiced a LOT, and really practiced that song a lot in particular. When you play a song that much, it can become a little like muscle memory taking over so you aren’t really “there”, but I remember about halfway through, looking up at the audience and just feeling this CONNECTION! We had worked so hard up to that point. We had written and recorded the album during a particularly difficult time personally, as well as curated the event we were playing which had been tough, and this was it – the moment we’d worked towards, playing one of our favourite songs we’d written in front of a packed room. It was magic.

Fortunately, both live performances were really memorable in a good way, although there were a few rehearsals *very* early on, where we were just trying out what the music would sound like in a live setting that are best left forgotten. It’s probably the same for most bands, but there were a few moments around that time I wasn’t sure the live element would work.

A few, yes. Relay Tapes have just released a really beautiful EP on Shore Dive Records. It is really, really fantastic so that is highly recommended. Mylets aren’t really *new*, but their new mini-album is just stunning. They haven’t really done anything for years, and then all of a sudden release an absolutely astonishing record. I’m a little obsessed with Draag Me (and their parent band The Spirit Of The Beehive), the new Nothing EP is really fantastic.

Maybe Annie Clark? She’s fearless and has total command over what she wants to achieve and how to do it. That is the ideal really. I would literally play any instrument in her band. There are a few UK artists I’d love to collaborate with in New Ghost but won’t say in case they turn me down. Another dream collab would be with Zack from Spirit Of The Beehive. I’d love to get in his headspace for a while, see what’s going on in there.

I don’t really want to think about it…I’m struggling to think of something that could come close really. Not in a financial sense obviously, but I get a lot out of creating music. I really wouldn’t like to think what could fill that hole. I’d maybe try my hand at writing something perhaps.

I mean… there’s perhaps a kernel of truth to it, but I don’t think that’s necessarily the whole story, and Trent himself would perhaps agree he was being a little contrarian there. Rock music can be anything. And you will know if it’s good, because it’ll hit you between the eyes and you won’t forget it. Personally, I do like my music to have a little subversiveness or that “secret chord” that we’re all looking for, but I used to listen to Deftones with my mum as a teenager. so I don’t necessarily subscribe to the belief that parents “should”, or even will hate it. Just the ones that are attracted to beige.

Well, we were meant to be playing with Kavus Torabi (check out his album by the way, it’s gorgeous), but the soft apocalypse put an end to that so…We are releasing Future Is Dead because it felt like an important time to release music.

Before the lockdown, we had actually almost completed our next project, so as soon as we can, we’ll be continuing with that. Whatever it may turn out to be. At the minute we have a host of almost finished songs that were recorded before our favourite recording studio closed, so there was a mad dash towards the start of this year to get a whole bunch of material finished up so that we could make use of the studios final days. One of my favourite bands once said, that when you release something – you should always have the next thing written. Thus far, that’s what I have aimed to do.