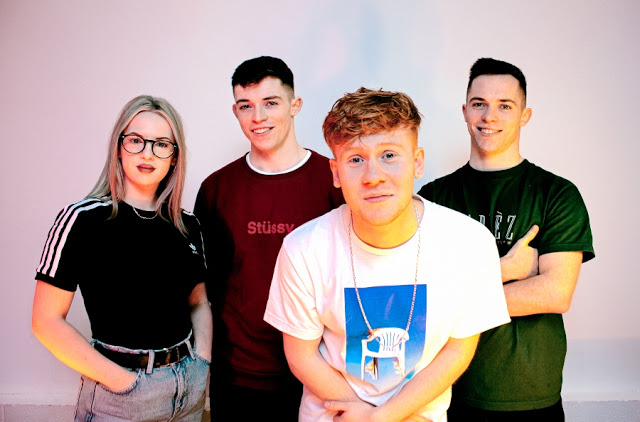 UK indie rock band Vodoo Bandits have released their new single ‘Empty Swimming Pool’ via Superblue Records. The band has been featured on Youtube channels like Fancy melancholic and New Sounds Good. There streaming rate is close to 140 000 plays to date. Their debut single was selected as track of the week on Indie Rocks Radio Manchester. The band has been also received radio play from Idobi Radio and have featured in Spotify’s ‘Hot New Band’s’ editor’s playlist.

The members grew up in the Bee Gees previous neighborhood, The Isle of Man. Two of the members still reside in the area, while two are attending university in Liverpool and Newcastle. The band includes Ben Donaldson (rhythmn guitar and vocals), Corey Vaughan(lead guitarist), Nathan Vaughan(Drums) and Charlotte Wilby(bass). The band is on varying levels in their musical development, with some picking up up the guitar in middle school and others in the span of one year ago.  The band is playing supporting slots in Liverpool and New Castle this year. Their music is reminiscent of Grouplove, The Strokes and Car Seat Headrest.

Band member Ben adds, “ I was creating many fast-paced indie rollercoasters in December 2019, and this one just stood out to us! It had a real uplifting feel and groove. We quickly added it to our set before our England debut that same week, and it has served us well as an attention-grabbing set opener since! I wrote the lyrics with my dog, which is probably why they don’t make too much sense, but we both love the counter culture; and that is what this song is about. But, if that’s not for you, alternatively it is about the blurry outcome of our decisions with symbolic imagery!“