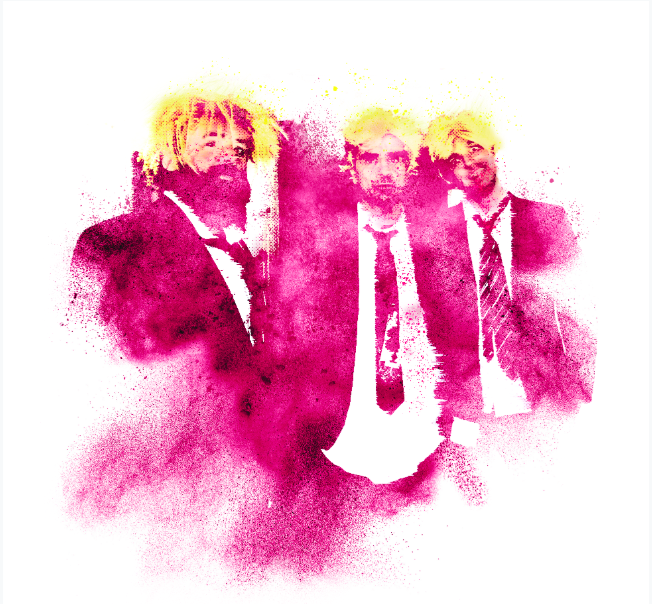 Those Fucking Snowflakes are a vibrant clash of political punk, hardcore rock and math rock, a band formed as a means to scream the dread and horror faced in these confusing times of our modern society. From the current mess of the UK political system to the intolerance of, well, everything. From race and gender to such simple items as Greggs releasing a Vegan Sausage Roll, the band are shouting about it backed with a tight unique sound and occasional off kilter humour.

Those Fucking Snowflakes released their debut song ‘Stop Being Dickheads To Each Other’ in October which quickly gained a massive amount of support from Tom Robinson at BBC 6music. Tom fought hard to get an otherwise ‘unsuitable for radio’ band onto the airwaves via 6music. He even invited them down to the BBC Introducing Festival to do a quick guest spot with Jason Williamson of Sleaford Mods during his panel.

(BP) I guess the entry point for most people is stuff like Nirvana, it was when I was young and from there you grow off into different directions. They still seem to be a focal point generations later.

Personally my biggest influences came later –  a lot of the british post-hardcore stuff in the 00’s – yourcodenameis:milo, mclusky, Hell Is For Heroes and Reuben, I just like the sounds they made – these big slabs of melodic noise. YCNI:M were a favourite, I liked what they did with off kilter timings and just this huge wall of noise. The album ‘Ignoto’ is amazing, I’m surprised anyone managed to capture the live sound of them so well.

Refused are a hugh influence as well, the use of complicated jazz timings in hardcore music was a big inspiration – and finding a way to fuse that with my other big influence ‘And So I Watch You From Afar’ (a mathy post-rock band) is a constantly evolving and enjoyable challenge.

Production wise, I do like a kind of raw sparse live sound – like Steve Albini captures so well. I love it when you can just hear a vocal performance that’s not been tampered with by too much production.

(BP) Songwise they mostly start off with the music, I’ll sit at home on the Mac using a desktop audio programme and start recording the ideas I have on guitar then spend ages trying to programme in the time signature changes so the click track works properly.

Sometimes the songs don’t sound that great so I leave them, and come back later. The beauty of writing in a desktop programme is that if it seems parts of a song don’t work I can rewrite parts easily until it sounds good rather than just abandon an idea that could be great with the fat taken out.

From there they go into the practice room for the drums and bass to be written, some songs we have to spend a lot of time on just one part of the song. We have a new song using a couple of polyrhythm changes that we had to spend a while getting right.

We do like to challenge ourselves musically, trying to avoid standard song structures in 4/4 – although we do a bit of that for a break sometimes – it makes it more fun.

The lyrics tend to come last and the words are moulded to fix the music. Although ‘Stop Being Dickheads to Each Other’ had the idea of the lyrics before the music was written. Often I’ll just start shouting random words over the music and try and make sense of them later. Sometimes we start with a title or subject and write the music around that.

(BP) With this band it’s mostly whatever bullshit is going on at the moment, from what a mess Boris Johnson is making to reports of increases in hate crime, fracking and more. The band was founded as a means for me to put this anger into words and go into a room to scream about it, it’s very therapeutic and beats moaning on Twitter, though I still do that a lot too.

I came off medication for depression and anxiety a couple of years ago, after being on them for well over a decade. I’d found the state of society bothered me a lot more when not lost in the hazy bliss of Mirtazapine everyday – so doing this helped.

(BP) There’s too much music that sounds manufactured, that sounds like it was tailored to a specific audience by a board of 8 rich white guys in suits who then give a brief to someone to make a song that hits the target demographic.

Too much music is full of auto-tuning and post production corrections, you don’t hear the flaws anymore. A slight wobble or off key note in a vocal can carry much more emotion than words can convey on their own. A slight ‘crack’ because the singer really believes in the words they are singing. Imperfection is a beauty in itself and doesn’t always need to be changed.

There’s more people making music now, the internet has made it easier to get your music out but harder to get it heard. Live audiences are dwindling as less people have money to spend heading to a small venue to see an unknown act. More expensive drink prices means people are less willing to go out. It’s a shame.

(BP) Music creation – I struggle to be around people at times, especially in crowded rooms I can feel a bit overwhelmed and stressed out at times, so being in a room with 2 other people can be a lot easier. that’s not to say I don’t enjoy the gigs, it’s good to see people enjoying something we create and we seem to attract people who are not huge dickheads so I don’t have to deal with bellends. It’s been more fun.

Our first ever release was championed by Tom Robinson who fought hard to get it played on 6music, it was unexpected as it was our first release, laden with explosives with a band name nobody could say on radio or expect to take seriously. It was recorded in our practice room and in the corridor outside it as well, so it wasn’t an expensive production.

We never thought we would get a gig outside of Blackpool let alone have a legend like Tom work so hard to get us played on national radio.

(BP) According to my last.fm profile my most listened to artists over the past 180 days, in order are

I keep a playlist every year of new songs I hear and add them as the year goes on so I can listen back at the end of the year. total nerd.


Our debut EP ‘U OK Hun?’ was just released on our own label The Recording Industry Is Dead, Records.

We have planned to record another soon for release in the first half of next year, just arguing over which songs to record.

We are trying to get more gigs and just keep playing as much as we can to as many people as care to watch.