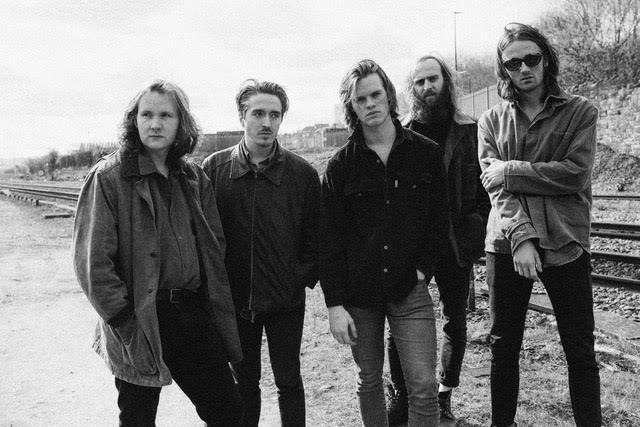 Tearing at the seams with a boundless, tempestuous and fiercely invigorating energy, ‘Care Less’ was produced by Dead Nature main-man and Spring King-pin: Tarek Musa, and proudly wears his seal of approval. Seeking out Musa to capture the raw energy of their electrifying live performances, the track marks a significantly bolder, brasher, and more daredevil side to the band that tips its hat to the fuzz-flecked rampages of  IDLES or Cage The Elephant, or the loose-cannon punk leanings of Parquet Courts.

Clocking in at a neat 2’30, ‘Care Less’ fires on all cylinders from the moment go; a white-hot blaze of buzz-saw guitars, motorik percussive hurtle and sneering gasoline-soaked lyrical apathy.

Speaking about the duality of message mirrored within ‘Care Less’, SHEAFS says:

“Care Less was written with a double narrative. On the surface, the lyrics condemn those applicable social pressures of ‘fitting in’, much like being back at school and aspiring to be one of the ‘cool kids’. The second narrative is something of a self-reflective one. Caring less about having a sound that is refined and embracing one that isn’t…. We see this track as a major stepping-stone in our songwriting and will dictate where we go next.”

A blink-and-you’ll-miss-it thrill, ‘Care Less’ was written with the same sense of urgency that is evident from the breakneck pace of the record.  ‘Care Less’ was quickly laid down in a matter of days at Whitewood Recording Studio, Liverpool, with additional mastering by Mike Cave (who recently mixed and mastered Lewis Capaldi’s latest chart-topping album).
‘Care Less’ immediately follows a Summer of frenetic activity for the quintet, that seen them release their sensational recent single ‘Popular Music’ (also produced by Tarek Musa), win over crammed halls at Dot2Dot in Nottingham, Manchester and Bristol, but also play to a big hometown crowd at Tramlines Festival in Sheffield. Sealing the deal on a summer of groundbreaking shows, SHEAFS were also crowned ‘UK Talent Winners’ at Mad Cool Festival in Madrid this year.

Following a stint of high profile support slots with the likes of The Amazons, The Coral, and Idles, plus their recent tour with US rockers Greta Van Fleet which saw them win over audiences all over Europe and at packed-out room at London’s Electric Ballroom, SHEAFS now look forward to a headline tour of their own. Slating-up gigs this Autumn at prestigious venues such as The Foundry in Sheffield and Rescue Rooms in Nottingham, don’t miss the band as they blow the roof of some of their biggest shows to date: