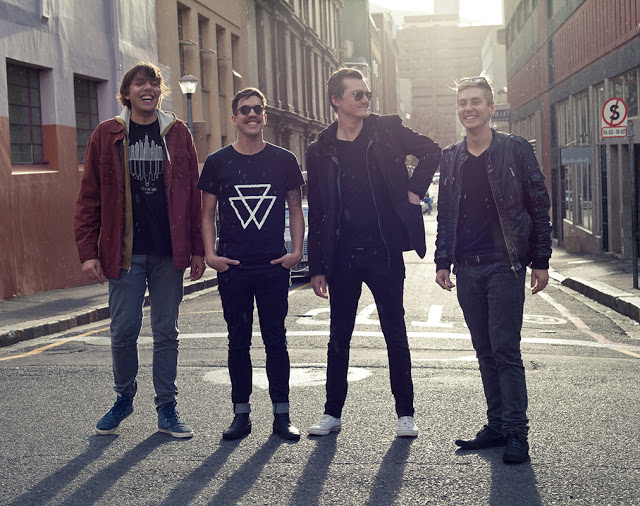 Kidofdoom are an instrumental space-rock band hailing from Pretoria, South Africa. After forming in early 2007, the band were known for breaking genre boundaries and treading land no one would even dare. Inspired by acts such as M83, Pink Floyd and Air – Kidofdoom have managed to construct their own mesmerising and uplifting signature sound brought on by each individual member’s influential contributions. Their live show is an immersive experience rather than just a performance; intense light shows and eye melting visuals set the tone for their remarkably energetic live presence and sky-cracking tones.

In 2007, Kidofdoom released their debut self-titled album to a wildly praised response, and in 2009, they released a follow up and sophomore LP titled My Faith In War which was inevitable successful in progression; featuring ethereal guitars, planetary synthesisers, driving basslines and herculean drums on top of the odd atmospheric ebow and theremin section. The band have been asleep for a few years, but that doesn’t mean they will never arise. Kidofdoom are scheduled to play at Endless Daze festival on Friday the 2nd of November, awakening from slumber and set to wow unsuspecting audience. For more information (tickets, line up, etc) on Endless Daze, visit their website.

We caught up with Ryk and Johan of Kidofdoom on their sensory experience and performing at Endless Daze festival 2018:

For anyone foreign to Kidofdoom’s dazzling luminosity, how would you personally describe the music you collectively create?

Your last powerfully engaging album My Faith In War was released back in 2009. Dare I ask, do you have any new recordings or unreleased material planned for the future?

Ryk: Myself and Richard have started writing a bit of new material earlier this year. We are still in the pre-production phase but aim to release some singles or an EP in the near future 😉


Kidofdoom are scheduled to perform at Endless Daze festival in November, what are you most looking forward to about attending or performing during this adventure?

Ryk: It’s a fantastic festival! One that resonated with all of us that attended last year. However, the most exciting aspect for us is getting on the stage again with our best friends! We are also excited about seeing a lot of our old fans and hopefully we’ll win over some new ones.

Johan: Yeah, myself and Makkie played last year as Hello Beautiful, and to date it’s still our favourite show of all time along with Rocking The Daisies 2018 as a close second! We are big fans of the Psych Night boys and try to attend any show they have to offer!

How do you feel about Johannesburg and Pretoria’s current live music scene? Is there anything you’d like to improve or even change about it?

Johan: The scene is so great there and are so many cool underground bands now – even when Kidofdoom ended in 2010 there was a huge instrumental band scene that exploded during that time, which was great to see and attend as a fan! I would say don’t worry too much about money and how many people attend the show and focus more on giving the people that do attend the best damn show of their lives!

If Kidofdoom could choose that one ‘dream-collaboration’ with any artist on the planet – who would it be, and why?

Ryk: I think each of us will have a different answer to this one. Personally I think M83 would be a good one. I think they understand the importance of space between notes and are able to create these huge soundscapes with enough pop sensibility to appeal to a larger audience.

A fan favourite track, “Sociallight” is pure textural bliss engulfed in energy, could you explain the inspiration behind this particular track?

Sociallight’s main progression was written by Johan on keyboard. It reminds me of someone going to a party, socialising and then ending the evening on a high. I think it’s a great addition to the upcoming festival!


Kidofdoom are famously known for their immersively vibrant live shows, where occasionally live performances are expanded further with the use of triggered visuals. How important do you feel this is in experiencing Kidofdoom’s live show?

Ryk: It’s paramount. What Ben and Peter create for us visually is a spectral feast. Every visual and light is triggered to every beat, and is planned long in advance with a specific setlist in mind. The entire Kidofdoom show is a sensory experience. We want people to walk away from it with a feeling of “what the fuck just happened?”

Johan: I always joked that Kidofdoom have never toured with a sound guy, but we were probably the only RSA band who has travelled with a lighting guy!

Are there any specific pieces of gear, hardware, software etc, which you feel is absolutely essential in creating Kidofdoom’s rich, enchanting tone?

Ryk: Richard’s old spaceship of a keyboard had some really authentic sounds especially on the first album, as well as the e-bow that fills in a lot of gaps as a result of being an instrumental band.

What does the (unforeseeable) future hold for Kidofdoom?

Ryk: We would like to see a new album and maybe a couple more shows to accompany that. Let’s first focus on Endless Daze.

For more information (tickets, line up, etc) on Endless Daze, visit their website. 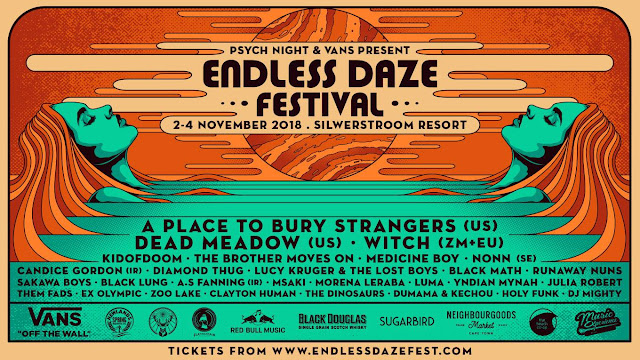