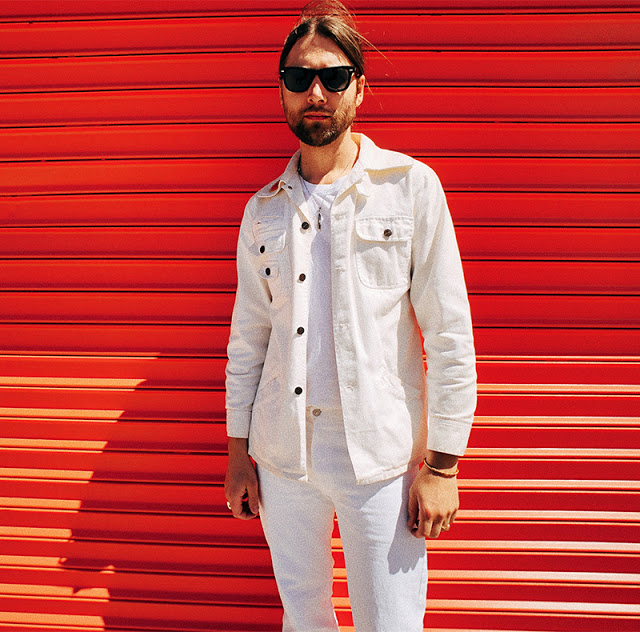 LT Wade is the moniker of British musician/producer Liam Wade, who began his professional career as lead guitarist for Courtney Love in Los Angeles in 2007 before moving back to London to join forces with former members of Black Wire to form Lord Auch. In 2013, Wade formed FURS with Olly Betts of The Duke Spirit and sister/vocalist Elle Wade. FURS released their debut album Just Kids in the summer of 2016. Over the course of his career Wade has been on the road with indie legends Johnny Marr, Gaz Coombes and Allah Las, among others.

Transient, LT Wade’s latest offering via Dopeness Records recently dropped on 27th July 2018. The album’s title is an example of life imitating art, given that over its two year creation, Wade moved from London to San Francisco and then finally to New York City. Sonically Transient reflects all three cities: tracks like “My Sun & Stars” and “Lost Angeles” fully embrace the West Coast/California sound – “Hard To Know” and “Hell Of A Night” incorporate a more European/Krautrock feel to them and “This City” and “A Summers Dream” were recorded in NYC this past winter with jazz saxophones and more industrial tones.

We caught up with LT Wade on spontaneous creativity and the life of a professional musician:

Why did you get into music?
I got in to music very young. My Dad plays guitar and always had a great record collection, so me and my sister always had great classic pop and rock played when we were younger. In my early teens I was just obsessed with music, bands and everything that went along with the music industry. I’m still obsessed with making music.

Which comes first when you’re producing – the sound or the idea?
It’s changed over the years. Originally I’d always start with a guitar and mumble a melody then work the lyrics out later. These days I work much differently. I love Ableton and I use the “Ableton Push” to create either beats, synth chords, bass etc and build arrangements or interesting loops to work from. Eventually molding it into a song.

Does the album feature any collaborations?
Not in writing terms. I wrote all the music and songs but I collaborated with a couple of awesome musicians. Olly Betts from The Duke Spirit plays all drums and wrote his drum and percussion parts. He also mixed a couple of tracks. I just either send him a rough demo and he instinctively knows what I want. I don’t need to give him very much direction, I always love his style. We’ve played together for 8 years now and will continue to do so. I also collaborated on parts with Grant Zubritsky in NYC. He’s an awesome Bass, Sax and synth player. He’s a total dude and has played with Lorde, MSMR and is currently in Nick Murphy’s (Chet Faker) band. Collaborating with them on parts has pushed my songs to a better place. I’m working with both these guys on the next record too.

What’s on your current playlist?
Im a mixed bag with what I listen to but I’m currently digging the new ‘Pusha T’ record. I’m a huge fan of Kanye productions. The last vinyl I bought was ‘Amen Dunes, Freedom’ I’m also curating my own spotify playlists and releasing them every couple of weeks through my website and socials….’LT’s Echo Echo’ It’s been a great way to discover new music for me.

What techniques do you experiment with to get your original sound?
I don’t always like my guitars to sound like guitars. I made effort with this record to get some unique guitar tones. I’ve collected a great pedalboard over the course of my career. One of my new favorites is the Electro Harmonix- Pitchfork. You can get some wild sounds out of that thing. It’s also not a straight up guitar record. I like to experiment with sampling in my arrangements and blend them in so it’s not so obvious. Ableton makes it so easy to come up with weird sound design.

Take us through a day in the recording studio.
Studio sessions usually start around 11am and the first thing is always coffee. We can’t get started without it. I always turn up to the studio with an sketch or a loop, Something to get the creativity flowing. Then If I’m with Olly or Grant we’ll work on the basic song structure. Olly would probably track the drums first and I’d play all the other instruments to what he’s tracked. Building from bass and guitars then if the vocals are all written we’d track them. We always like to live with a recording for at least a few days before I’d do any editing or mixing just so my ears are fresh and I can clearly hear what’s working.

Was there a specific moment in your life where you thought, “this is what I want to do”?
When I first left school at 16 I did an apprenticeship in air conditioning and refrigeration for nearly 3 years. It was awful and I hated it. I learnt quickly that I wanted to do something else. My Dad said I could go study Music technology at college because it has elements of engineering as well as being a creative. He works as an engineer and thought it was important. I studied music tech at college and university and figured I’d work as a studio engineer or something behind the scenes. I always loved sound design. On the last day of my exams in London I went straight to an audition for Courtney Love to play in her live band. The next week I was on a plane to LA to start rehearsals. That was the start of my professional career as a musician and I loved it. I never returned to school and I’ve been making music and playing in bands ever since.

What do you keep close by while you’re playing a set?
Water and my monitor. I always need refreshments and to be able to hear what the hell I’m doing. A cheeky beer is usually sitting next to the water!

What gets your creative juices flowing?
It’s mainly when I hear some new music that inspires me but I can also feel creative after reading a great book or watching a dope movie. I try to work on music everyday whether I’m in the mood or not. Sometimes I get nothing other times I can write a song or piece of music that I really dig.

Take us through your collection of gear, tech or software that accompanies your creative expression.
I’ve accumulated a lot of gear over the years. I’ve always been a Fender guy. I use a custom Strat, a USA telecaster from my ‘Courtney’ days and I have a beautiful Pink Jazzmaster that’s my main guitar at the moment. I also have a fender Jazz Bass. Amps I use a Fender Princeton in the studio and a handwired VOX AC30 on Tour. My pedals constantly change as I’m always adding more but pedals I use a lot are: VOX delay lab, Diamond Compressor, Electro Harmonix Small Stone, Holy Grail Reverb. Fulltone OCD overdrive. My favorite fuzz is my Big Muff. Recording I use a MacBook with Ableton and Ableton Push but I mix in Logic X. I think it’s good to learn a couple of different DAW’s as they all have different pros and cons. I use Universal Audio and a bunch of their plugins when mixing. Soundtoys plug-ins are all over my album.

Any side projects you’re working on?
The projects I’m working on at the moment is the next ‘LT Wade’ record and getting my live band locked in but I’m always looking for new artists to work with as a mixer or producer

Breakdown the news for us: what can we expect from you this year? I’m played an album launch at Pianos NYC. I’m looking to book a tour to promote the album in the fall. I’d love to head back to UK & Europe to play some shows. I’ve already started work on my next record so I might drop a couple of songs towards the end of 2018 if I feel they’re ready.