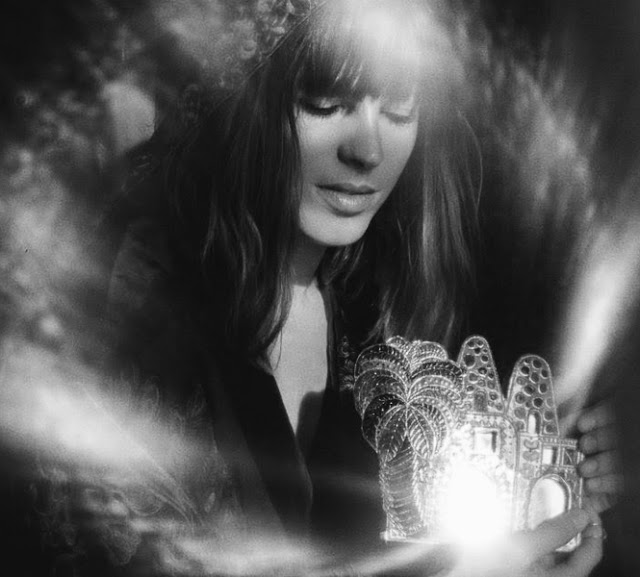 Healing within the clutches of the heart, the flourish of reflection and wilt of each nestled thorn; to drink in desperation the clarity of sparkling water – a folklore, a fantasy of ourselves – the sickening beauty of panoramic dreams; seeing oneself from all angles at once. Hazey, loving memories. Breakdowns. Our nightmares. The realities more terrifying than the monster-worlds world we built inside us as children – and we hide, in each journey that struggles within us. Each life, its honeysuckle pleasures – it’s seeping bitterness and overwhelm.

A deeply intimate, and experimental traverse through the psyche; mirage-monsters, dreamlike spirits trapped in polaroids, a loving embrace of the self in childhood: picking berries, quiet long walks and conversing with deer in Sweden – French multi-instrumentalist Melody Prochet brings us Melody’s Echo Chamber’s long awaited sophomore album, Bon Voyage which braces our eager twilight-landscape on June 15th. After six years since her debut – we’ve been teased only with leaked tracks from a past what-was-once-in-the-works album Prochet worked on for two years – in a sickeningly sweet confession, she realised that it just “wasnt meant to be” -and in the time she has been away, Prochet has immersed herself in the beauties of her Swedish landscape, moving in the winter of 2016 to work with her collaborators and friends; the “Bermuda Triangle” was formed, consisting of Melody, Fredik Swahn of The Amazing and Reine Fiske of Dungen as her core team; and many other friends along the way. A spiritual journey within herself led her back to her childhood music conservatory, to experiment, learn and re-learn instruments from the places within her that had perhaps been left behind in a flurry. With an unfortunate accident halting progress on Prochets work, she returns with raw tenderness, an experimental vulnerability and sweet, loving melancholia in her auditory reflection; leading the listener through the bittersweet reality of her personal journey.

A tender, syrup drench, sweet honey crunch beat greets us in swirling shoegaze haze – the first single released from the upcoming album – ‘Breathe In, Breathe Out’ glitters as a breath in the sparkling dew of morning. A blooming return in Prochet’s first release in six years, a kaleidoscopic first breath fills rose-sick lungs; a caress of gentle distorted fuzz of a sea-soaked guitar sings in tune with a dreamy, psychedelic synth: a gentle glimpse through Protchets vocal summer harmonies. An animated whistle in chewing-gum bubble-pop dances with a melodic guitar, a rise and fall into a vivid shoegaze daze: charming distortion in progressive chords as Prochets sparkle tender, her voice ethereal in a glittering world and oscillating synth. A percussive break; a lo-fi beat cradles Prochet’s delicate R&B-esque vocals as they wax lyrical, sweetened by the harmonious flutter of textural experimentation. Unique in genre progression, a fuzz of driving chords; reminiscent of the alternative-rock of the 90’s or early 2000’s, a sustaining compulsion in companionship light with Prochet’s blue-sky voice and textural exploration. The technicality of classic-rock; glam guitar builds in juxtaposed timbre, a Zeppelin-esque solo beneath the fragile lavender touch. An energetic synergy sweeps melancholic glow within a clear solo, summer clean picking amongst a sphere of loving, suffocating sound; Prochet’s vocal sugar engulfed in swirling timbres and vibrant, yet with a hazey juxtaposition of anxious lucidity. Heavy sun-beams in the glimmering pain of the breathe in, breathe out, of Prochet’s oscillating vocals in a dynamic mirage-like haze: a glowing warmth of heartbreak, simmering gently on bare skin drenched like exploding stars in harsh beach sand.

Opening in 80’s sci-fi splendour: ‘Desert House’ greets us, synthwave twilight in peak impression – a close-your-eyes-and-cry-nightmare-sweet vocal line leads us in driving, a dynamic bassline steady in it’s confident dance; percussive texture sweeps beneath the bassline, a hollow-sound reminiscent of a bongo-drum beat builds its incantation; a hypnotic tribal influence, the confident bassline repetitive in it’s urge-to-move assertiveness as Prochet bakes layers of timbre; a twist and pull of energetic peaks and lows in synth-modulation and experimentation. The steady tribal accompaniment breaks in brick-by-brick layers of foundation, textural travel in a curious tone – sounds as playful beings, reminiscent in psychedelic tints of  Arabesque, South-Asian and Eastern influence adapted in Prochet’s unique genre-defy; the lo-fi gentleness of her butterfly voice caressing wave-forms of South-Asian dance into loving instrumental possibilities, spiralling sounds often foreign to the Western ear gliding in tangents of World influence. A break in modern electronica and shoegaze amongst world-wide textural possibilities, ‘Desert House’ pulls the shivering sunburn of 70’s classic rock in spotlight splendour; spoken at first amongst the tribal percussive, in driven assertion breaks through in melodic distortion. Met, softly in an ambience of auto-tune sprites, the baby-pop-robotic curiously explores and weaves within the nostalgic rock licks and bends; the new flowering ambience a gentle fracture as Prochet’s voice reappears in wave-glitter syrup, pop-soaked IDM amongst a percussive beatbox as a lullaby; accessible, yet, a break away of modern electronic music with shimmering tambourines and sprouting saxophone in companionship with pop-robotic. Whispered ambience as a screeching guitar cries in feedback; along with the yell of human voices. A deep breath in. Prochets vocals intertwine seamlessly with delicately raw guitars embracing in polyphonic euphony; Melody’s hushed and delicate yet – still powerful vocal style; a strong range in tone, reminiscent of artists such as Kazu Makino (Blonde Redhead) and Karen Hover (Candy Claws, Sound of Ceres). A glittering sadness sleeps in the undertone of her falsetto embrace –

“My love, I always bleed
My feelings are dying
And at night, I dream too”

A twinkling melancholia cries in it’s stunning wounds, Prochets words amongst an uptempo textural glitch and percussive sphere of electronics an embrace in lamet, a shimmering beauty in shattering heartache; the cry unexpected, a lone guitar sparking embers amongst the reflective glitch-world. Arabesque laced electronica screams falsetto into a feverish bounce, dotted with a progressive-rock-esque bassline accompanying erratic yet harmonic vocal and electronic ghosts passing through and within one another. The sweet tangerine citrus in vocal melody seeps within a driven guitar solo and IDM-style beat before a sting of the lungs and: a conclusive, pained scream: a catharsis – to release all that has been held up within you, how it boils – to shatter windows like crystal hearts, to cry with each saccharine tear labour in let go – to be vulnerable; to say – fuck you. She flutters away in angelic harmony.

“My love, I still love you
But feelings die
And at night, I love you too
(She runs away and soothes her, the north wind)
(She drowns, in quicksand)”

An introduction in classical guitar rhythm, a style comparable to bossa nova melodies; ‘Visions of Someone Special, On A Wall of Reflection’ eases in with a cherishing warmth, constructing the track with an ice-cream, sweet and summer doo-wop rhythmic progression; a faded polaroid of a humid Sunday at the beach, a bleached childhood photograph-nostalgia for the 60’s. Prochets feathery, falsetto wisps chime solely throughout the track in French. An atmospheric soundscape grows gently in its sprouting blooms, the sunlit sparkle of the guitar shimmering amongst Prochet’s hushed hide-and-seek vocals and encompassing world. Vocal-line theatrics sing in melodrama of quick glissando cloud bursts, fluttering upward in cool embers of dance; amongst the stage and strut, spotlight on the avant-garde in melodramatic cry and teary-eyed applause –

“A mermaid and a vampire
Who is about to harm her.”

A Middle-Eastern sound; intricately woven within rough, traditional textures as sculpted into straw-basket, filled to the brim in spices – flavour in dance speak and avant-pop. Theatrics cut to a single melodic synth, the track progresses forward in it’s juxtaposing influences; an upbeat tempo drives forward an otherworldly synthwave texture, science-fiction in friction and smoothed to a doting shoegaze trance; as Prochet calms, her voice in palms cradle as she sings wistful, candy echos swim to pop-centered French reflections. Choir-sing darkness in angelic harmony; a leap to earlier theatrics, the quick, shimmering butterfly wings of Prochets vocal lines, the theatre in glissando fantasy and lovingly-anxious folklore –

“Hypnotize the werewolf
He loves her like crazy
He will suck his blood
All his feelings.”

Melody’s call-and-answer with her own harmony sings comparably to the melodrama of theatrical artists such as Björk, a unique sea-scape and spotlight struck of the juxtaposition as lovers. Painting renaissance of dramatic vocals, the break-away of solely Western genre nests within the tracks delicately yet – erratically sculpted form; present and recognisable, yet intricate in exploration of cultural textures and sound – never limiting, exploring, allowing and venturing outward. Reflection in a foreign fantasy and folklore offspring, a genre break-away in saccharine inclusion and embrace.

‘Bon Voyage’ is the glittering soul torn blank with a burn – the first photograph developed in a heartbreak roll of film. Halfway burned, blank – but still so incredibly beautiful, open canvases ready for the jigsaw, vivid and broken pieces of oneself. Of growing inward and outward. The whirring of a carnival both cotton-candy sugar-sweet to stinging citrus wounds. One without the other. Of growing up. The words that stir and sit as seedlings within us. Our love and losses. A mad world sculpted in the sticky clay, seeping and dripping from our fingertips as we embrace our own bodies as hiding places.