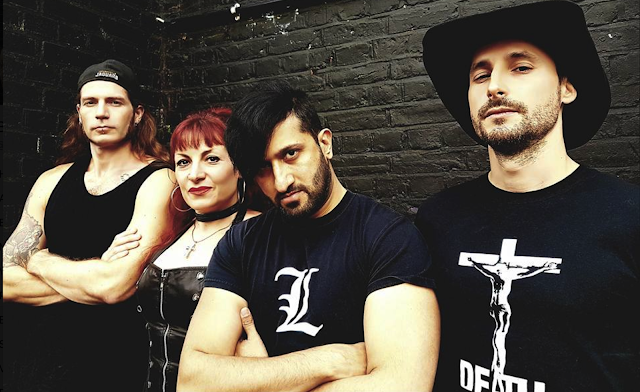 Black Sixteen were formed in 2012 by songwriter Amir Khan, who picked the name Black Sixteen using a random word generator to let the name pick the band rather than vice versa.

He is joined on guitar by Chris Campion who is visually impaired and highly active in the disabled arts, most recently having performed a series of one man shows on the fringe circuit. His musical resume boasts acts such as Kumi and the Triumph of Love, and Florence Joelle’s Ring of Fire.

Dany Jones, previously of established acts such as Kopperhed and The Kut, brings her feisty Italian energy on bass. Among her career highlights she has supported acts such as Backyard Babies, Hatebreed, and has performed live with Cherie Currie of The Runaways. ​Dave Guy, an accomplished multi-instrumentalist joins on drums. A versatile musician with a genuine passion for what he does, Dave has played a multitude of instruments with bands such as Kopperhed and Gasoline Thrill, and is also currently performing with Grace Solero and The Day of Locusts.

Sometimes vulnerable and sometimes visceral, Black Sixteen are a dynamic and emotionally charged rock band with a candy heart.

The new single ‘Freak‘ is their second release since their eponymous 2012 debut EP. During this time the band has evolved their sound and written new material live, keeping it in a state of evolution from show to show.

‘Freak’, mixed and mastered by Marc McClusky (Weezer, Bad Religion)  is a song with multi layered themes. It is about being persecuted for being different. It is also a twisted love song for twisted hearts.. about falling in love with someone who is broken in the same places as you.

Heavy Rock from the heart

Your latest singles ‘Freak’ and ‘Drown‘ have just been released. How did the recording process differ to that of your self-titled debut in 2012 Black Sixteen?

Well for our debut EP I recorded everything, mixed, produced and mastered it myself. The vocals were recorded in my drummers flat. For our newer material I’m lucky to have a bit more help. Our lead guitarist Chris Campion is a talented soundman and he engineered and recorded our guitars. All I had to do was show up and play which was great. I recorded the vocals myself in lots of dingy small studios. We did a mix ourselves which we then handed over to Marc McClusky (Weezer, Bad Religion) who did the final mix and master. I guess you could say that the principle difference between the new releases and our first EP is me recognising my own strengths and weaknesses, and outsourcing the work that could be done better.

What ingredient do you feel is essential to crafting your sound?

Having something to say or an emotion to communicate.

Any new artists on your radar?

These days I’m binging on Morrissey’s back catalogue. I tend to obsess over one artist at a time, I stay vaguely in touch with what’s going on but live in my own bubble a lot.

I agree with him on the subversiveness and intrigue, I think the purpose of art in general is to provoke thought, to invite reflection and insight, to challenge and change.

We were playing Camden Rocks Festival last year and were on around 11pm. We went on stage to a busy crowd and the audience kept thinning out. Everyone was looking at their phones and leaving. When we got off stage we learned there had been a terrorist attack. Memorable for the wrong reasons, but that one sticks out.

All of my early shows.

Probably a pop princess. I like pop music, it may be soulless but it can be incredibly efficient and well crafted. So someone like Britney or Katy Perry for example, I think that we could do something very interesting mixing our genres together.

You celebrated the launch of your single with a show at The Crowndale Club on 28 October,  and will play a gig at the legendary rock/goth pub The Dev on November 10th.
If you had to choose between never playing live again, or never being able to release music again… Which would you go for, and why?

This is a pretty easy one for me. What I love about music is the process of creation, of painting with sound and emotion. Performing live is cathartic and can be fun (and we put on a damn good live show) but making music, making art, making videos, that’s where my heart really is. Music has saved my life on more than one occasion, I spent a lot of my lonely childhood listening to albums that made me feel not alone and what I really want is to do the same for someone else.

Tell us about any upcoming releases you have in the pipeline.

Our plan for the future is to keep releasing songs every few months. We’re producing the music and videos ourselves and as I mentioned, the creative process is what I thrive on. Our next single will be called True Blue, and it might be out by Xmas. You heard it here first!

Be good to yourself.