Behind the Scenes with Barbarisms 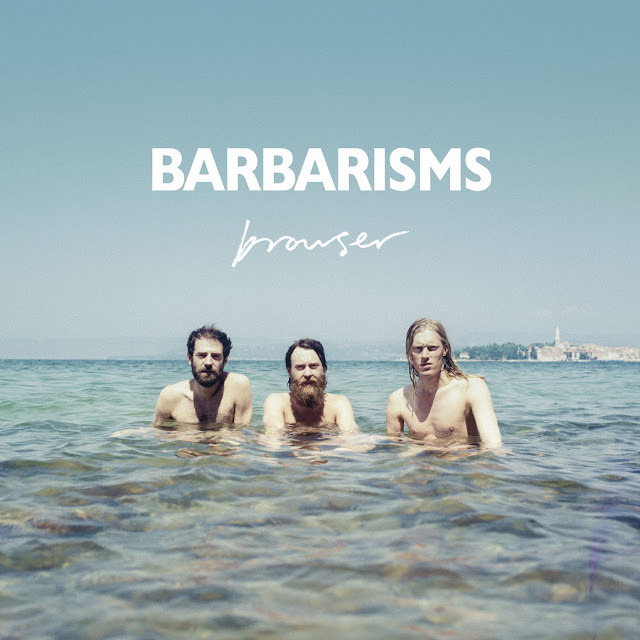 Barbarisms is a trio out of Stockholm, fronted by American songwriter Nicholas Faraone (voice/ guitar) with Tom Skantze (guitar) and Robin Af Ekenstam (drums). The melodies of their 2014 self-titled debut were compared to Guided by Voices and Built to Spill, while the lyrics drew parallels with Destroyer and Silver Jews. Experimenting with rough and ready recording methods to capture the spontaneity of their process, the band developed what Uncut described as a “breezy” aesthetic that highlights the “conversational poetry” of the lyrics. The result Loud & Quiet called “A captivating slice of lo-fi wonder that shines like a gem in a shimmering pool of darkness.“
Hi there, how are you and what are you up to today
I’m trying to figure out if it’s worth trying for sleep. We fly to Germany tomorrow and I have to leave my place at 5AM. Sometime between now and then I’ll be packing my guitar case with t-shirts and underwear to save 100 euros on the extra bag check.
To those not familiar with you, how would you describe your sound?
Run-of-the-mill, drop-out-of-college rock
What are the 5 most influential albums that have influenced you the most?
Destroyer’s Rubies
Silver Jews’ American Water
Lou Reed’s Growing Up in Public
Paul Simon’s The Cape Man
Chris Dowd’s This Brown Shoe
Which other artists are you into at the moment and why?
We met A. Dyjecinski in London when we did a couple London shows for the first record. He’s just put out a great record called The Valley of Yessiree and we’re hoping to do some shows with him soon.
Are there any key pieces of equipment that you are using to define your sound?
The drums tend to have a lot of tape, rags, or t-shirts on them. And I tape a picture of Mike Glover over the hole in my acoustic.
What would you say some of the challenges artists face today in the music industry?
I wouldn’t say. I’d make a point not to say.
Where do you gather songwriting inspiration?
Here is what I don’t do: I don’t go around looking for the small beautiful details of the everyday. I always hear that that is what good songwriters do, and I’d be happy if someone said that I did that, but I don’t live that way. I pay attention to what friends and dead poets have said, and to the words that run through my head. I like when a lyric comes to mind, and I have to ask myself: “Can I get away with that?” And then to find out if can.
Take us through your songwriting process. Are there any particular steps you take when put music together?
There’s a couple people I write very long letters to. I write fast but it takes me a long time to mail them. Sometimes I read through them and find some lines I end up using for a song. It used to be that way with notebooks, but I do letters more than notebooks now.
What’s the best gig you have ever done and why?
Playing Black Market in Rome was special for us.
And the worst?
The worst is when a bar is tightfisted with the drink tickets
If you weren’t a musician what would you be?
A Saint
Do you have any particular gigs or festivals that you dream about playing?
Nope
If you could perform alongside any other band or artist, who would it be?
Destroyer, which we’ll have the luck to do on June 7.
Do you have any information regarding upcoming releases, projects or gigs in the pipeline that you would like to tell us about?

Our second LP ”Browser” will be out in the UK on July 1. We’ll be playing Rough Trade East on June 29. Hope to see you there.

Check out the official video for “I Have not seen you in Days” below: