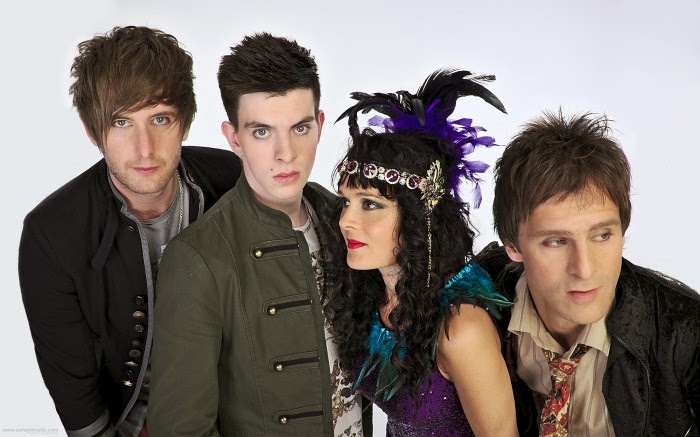 Psych-rockers Goldray are Kenwyn House (guitar), Leah Rasmussen (vocals), Geoff Laurens (bass) and Chris Hardwick (drums). The beginnings of the band started to take shape when House (formerly of alt-rock band Reef) and Rasmussen decided to start writing songs together following an impromptu Christmas Day jam. After a few lineup changes, Goldray was finally completed by Laurens on bass and Hardwick behind the drumkit.

The alluring sensuality of Goldray’s music gives them the ability to transport the listener to a different world. Leah’s ethereal Kate Bush-esque vocals add an other-worldly, dramatic dimension and combined with the band’s Led Zeppelin and The Doors inspired riffs, it’s a harmonious pairing. Their energy on stage and flamboyant outfits make Goldray a definite must-see live. It’s easy to see why the band has been compared to greats such as Cream and Pink Floyd, and the critical acclaim is much deserved. Expect them to be absolutely huge!

I spoke with guitarist Kenwyn House to find out more about the band.

Hi there, how are you and what are you up to today?

Really good thanks, Leah and I are engrossed in the creative process at the moment, writing album number 2. Thought we’d better get as much as we can done before things get busy with album number 1!

I suppose its female fronted Psych/Rock with a bluesy feel. We’re inspired by bands such as Jefferson Airplane, Hendrix, Kate Bush, Doors. We’re not totally retro but that era has effected us most.

What are the 5 albums and artists that have influenced you the most?

Between me and Leah it would have to be … Jimi Hendrix. Electric Ladyland, Kate Bush, The Kick Inside, The Doors, LA woman. Led Zeppelin, Patti Smith, Easter.

What other bands/artists do you really like at the moment and why?

To be honest that’s a difficult question to answer as there’s a lot of good bands, so it’s hard to just choose a few. …I know they’ve been around for a while but I still love Tame Impala. We like Hookworm as they have a great sound that’s kinda Psych with a bit of an early 90’s vibe as well. Melody’s Echo Chamber, nice atmosphere and sounds. Goat, we love the punk/Psych combo. The Wands are cool, could go on!

Where do you usually gather songwriting inspiration? What is your usual songwriting process?

I get inspiration from being alive and having a guitar in my hands a lot. Ideas just seem to accumulate and flow to us both very easily… Usually the music comes first but not always…. We play and work and mould until it lives up to our original vision. Jamming together until the magic happens!

You played at a number of festivals last year, including Download and Camden Rocks. Which one was your favourite?

I think Download was the best. It was an amazing day and really great festival to play…..We also managed to play the way we wanted to that day… The onstage sound was cool too!

What’s the best gig you have ever done and why?

With Goldray it would be our support of Motorpsycho at the Jazz Cafe last year … our last show at the Hoxton bar and kitchen felt really good too.

What’s the worst gig you have ever done and why?

I won’t mention recent stuff as I don’t want to diss the venue. However with my old band (Reef) I remember doing a gig in Corby, right at the beginning of our career. where the guy who’s night it was gave a running commentary over the PA between , and sometimes during our songs!!! I kid you not… It was the weirdest experience.

If you weren’t musicians, what would you be?
Let’s not go there.

Finally, we know you’ve been busy the past few months finishing off your debut album, which we are itching to hear. When can we expect it to be released?

Well that’s a tough one. We have some labels interested in us at the mo, so it all down to that really… We’re ready to go but it really is depending on who we go with and what plan together we all think is best.

Thank you very much for taking the time to chat with us Kenwyn!

Check out the official video for Goldray’s “Outloud”.

Find the band on social media!