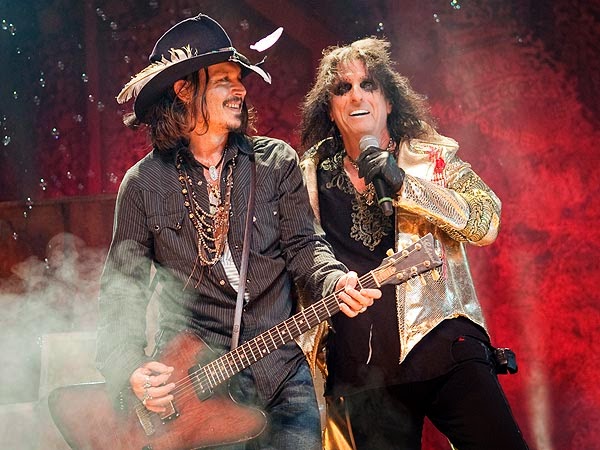 Shock rocker Alice Cooper is set to perform alongside Aerosmith guitarist Joe Perry and actor Johnny Depp under the name Hollywood Vampires at this year’s Rock in Rio festival.

The supergroup take their name from the infamous alcohol-fuelled group of rock stars Cooper formed with John Lennon, Ringo Starr, Harry Nilson and Keith Moon back in the Seventies.

Depp has performed onstage with Cooper on numerous occasions since they met on the set of director Tim Burton’s Dark Shadows in 2012. The pair have since formed a close bond which eventually led to musical collaboration. Cooper recently told the Rolling Stone: “We see each other a lot. He’s become a close friend and collaborator. We’ve done a lot of recording together recently. [Depp] is really a very talented and cool guy.”

An accomplished guitarist, Depp has also collaborated with the likes of Marilyn Manson, Oasis and Paul McCartney, as well as contributing backing vocals to Aerosmith’s Music From Another Dimension. Despite his musical prowess, the actor has expressed his adamancy that he will never make music into a second career.

Hollywood Vampires will join System of a Down, Queens of the Stone Age and Faith No More at the event scheduled to take place in September.